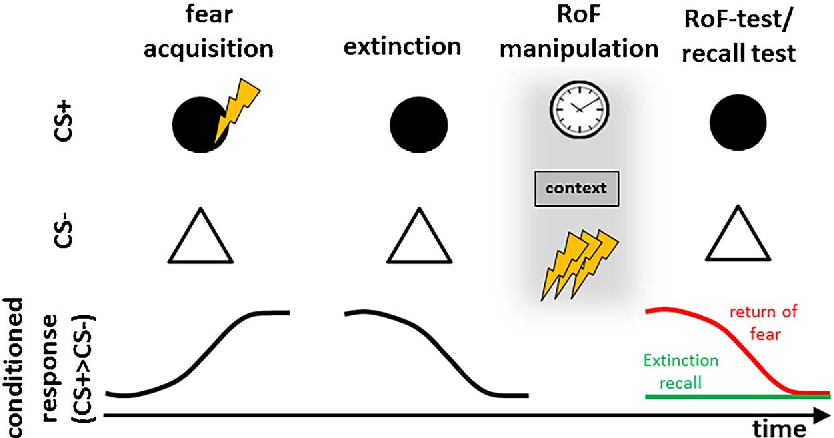 Clinically, the high re-ocurrence rate in anxiety patients after successful treatment is a significant problem. In the laboratory, this re-ocurrence of the fear (“return of fear”, ROF) can be triggered  through certain experimental manipulations. In the human field,  we have begun to systematically investigate experimental and individual boundary conditions underlying the ROF.                              In collaboration with the Institute of Psychiatry and the Institute of Legal Medicine at the University Medical Center Hamburg Eppendorf the first translation of pre-clinial research to  patients with panic disorder, post-traumatic stress disorder and acute trauma has been initiated.  As part of the Collaborative Research Center on Fear, Anxiety and Anxiety Disorders, a large longitudinal study on the impact of life adversity on the return of fear in an experimental setting is currently ongoing.

The so-called ‘replicability crisis’  has sparked methodological discussions in many areas of science in general, and in psychology in particular. This has led to recent endeavours of the scientific community to promote the transparency, rigour, and ultimately, reproducibility of research.
Originating from this zeitgeist, the challenge to discuss critical issues on terminology, design, methods, and analysis considerations in fear conditioning research has recently been taken up by the ‘Research Network for the European Interdisciplinary Study of Fear and Extinction Learning as well as the Return of Fear (EIFEL-ROF)’.
The lab is strongly interested in and highly commited to meta research –  an emerging discipline, with the goal to evaluate and improve research practices (research methods, reproducability, evaluation, and reporting).
The EIFEL-ROF network, for which Dr. Lonsdorf serves as the spokesperson since 2015, aims to increase communication and coordination through tutorial/research guidelines papers, joint publication of review articles and meta-analyses, coordination of cross-laboratory replication tests and data pooling (see here for an overview of our work). This will entail small steps from the individual research groups involved, while creating a giant leap forward for the field.
The discussion in the EIFEL-ROF network have generated many new (meta-) reserach ideas to answer questions on the methods we are using that we are hitherto unable provide a clear answer to. In the past years, we (in particular Rachel) have constantly pursued projects originating from these discussion. The projects include for instance the impact of inclusion of startle probes on fear learning or the inventarization of different operationalization of the “extinction retention index” in the literature and their empirical comparison in a number of datasets (in revision).
The EIFEL-ROF network is funded by a grant from the German Research Foundation to Tina Lonsdorf and Christian Merz (DFG, LO 1980/2-1) which is administrated by the University of Hamburg (University Medical Center Hamburg-Eppendorf).